You are here: Home1 / Learning Strategies 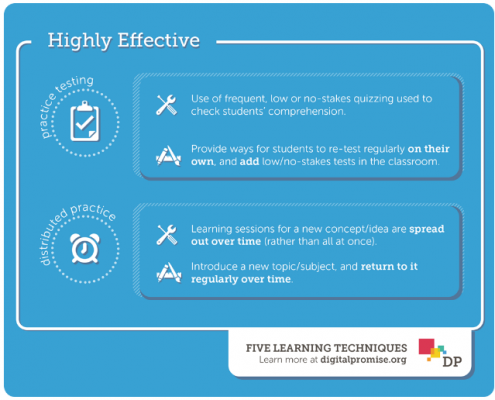 Practice testing (sometimes called “retrieval practice”) involves frequent testing or quizzing over a period of time to encourage students’ recall of the material from memory. Over time, this makes the material “stick.”The key is to make sure that tests are “low” or “no-stakes.” In other words, this is meant as a learning technique, not for assessment. Practice testing can be done by an instructor, or students can test on their own.

Distributed practice (sometimes called “spacing”) involves spreading out learning sessions for a new concept or idea over time, rather than all at once. To use distributed practice, educators should introduce a new topic or subject, and then return to it at regular intervals over time. They can also coach students in using this technique, and consider more frequent in-class tests to encourage repeated out-of-class study of the same material. To maximize students’ long-term retention of the material, they should leave long intervals of time, such as weeks or months, between practice and review sessions. 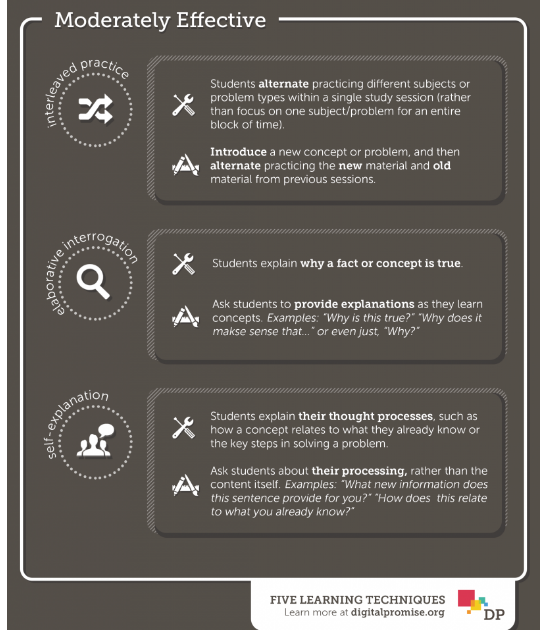 practice refers to alternating practice of different skills within the same block of time (abcabcabc), as compared to blocked practice in which subtopics are studied one after another (aaabbbccc). To successfully use this technique, instructors should provide a long introduction to the material (before alternating between new and old material). They may also want to use this technique with math as a first step before venturing into other content areas, where its benefit is less well-known.

Through Elaborative Interrogation, educators ask students to explain why a fact or concept is true. Through this strategy educators ask students questions like, “Why is this true?” “Why does it make sense that…?” or even just, “Why?” And, when the concepts are complex, it may help for instructors to help students identify the key concepts they should explain.